Massad Ayoob on Women and Guns

We found this insightful, no nonsense post over at Town Hall Patriots and they’ve graciously agreed to let us share a bit of it with you. Be sure and check out the entire post linked below. There’s much more where this came from!

In a time when what used to be called “the women’s liberation movement” has achieved many of its goals in terms of equality and empowerment, the concept that guns are somehow evil icons of male brutality has managed to survive as the longest-standing relic of the old “Suzie Housewife mentality.” Political enfranchisement? Of course! Entry into previously male-exclusive job markets? A done deal, for the most part. Economic power and self-determination? You bet.  But defend yourself and your loved ones against a deadly criminal, by resorting to a gun of your own? “OMG!!! You’re just surrendering to the brutal male mentality!” 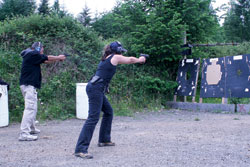 The Attitude Part
In almost thirty years of teaching female armed citizens, and longer than that teaching female cops, I’ve come to the conclusion that once you get past old-fashioned cultural predispositioning, women may actually be better and more decisive students of the gun.

You don’t jump up on a chair and shriek when you see a mouse in the kitchen? You don’t exclaim, “I declare! I do believe I have a case of the vapors coming on,” and faint when there’s trouble? Good–indications are that you’re on the way to getting past the cultural canard that women are supposed to be helpless and totally reliant on men to protect them.

Most firearms instructors agree that women have a faster learning curve than men in this discipline. They tend to have better fine motor coordination, as a rule, and pulling a trigger without deviating the muzzle off target is most definitely a fine motor skill. Their biggest advantage is that they are not born believing that because of their gender, they automatically know how to do something masculine. I’ve found that the female student more than the male wants to know, not just “how do you do that?” but “why do you do it that way?” With a proper explanation, she follows instructions, finds the results good, and moves on. With some of the males–not all, certainly, but some–the reaction is, “Ungawa! If Mongo do what instructor say, Mongo become ‘beta’ and instructor become ‘alpha.’ I, MONGO, am alpha! Mongo must keep doing it Mongo’s way! Ungawa!” It’s like de-programming cult victims sometimes…

There is a misperception that women won’t have the intestinal fortitude to pull the trigger when it’s necessary. That’s only true with an armed female who has bought into the “jump-on-the-chair-when-you-see-a-mouse” mentality. The female of the species, once she understands the situation, has no illusions that she’s supposed to kick the knife out of the attacker’s hand, or knock him unconscious with a right cross like the Lone Ranger. She’s less likely to hesitate. An outdoorswoman who is hunting to feed her family is not going to break down in weepy-eye flashbacks to Walt Disney’s film Bambi when the venison is in her sights; she’s going to hold her aim steady, and smoothly press the trigger back. 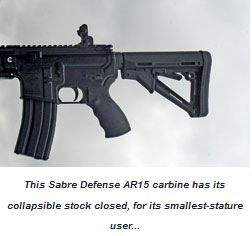 As I’ve watched women train over the years, I’ve seen other differences compared to the men. When the guys shoot a qualification, there’s (usually good-natured) teasing. “Hey, Buddy, ya dropped a point there! I’m ahead of you so far!” When the gals do the same, particularly in an all-female class, the difference is stark. The theme is mutual support: “You’re doing great, Sylvia! You’re only one point down! You go, girl!” 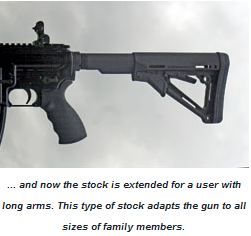 Most guns were designed by men, for men. The “pull” measurement (the distance between butt and trigger on a rifle or shotgun) will, in standard models, be designed for an average-size adult male. That means they may fit a tall woman. A lady of average height, or one of more petite proportions, will have to lean back off balance to hold it to her shoulder to aim.
The gunstock can be customized by a gunsmith (or by an individual who is really handy with tools and really knows the gun in question). Or, in many cases, it can simply be ordered with a “youth stock.”

Why, you may ask, don’t they ever call it a “women’s stock?” Ah, a topic opens here. We are a nation that tries to put racism behind it, and can’t quite achieve that. We are a nation that would probably like to put misogyny behind it, but can’t achieve that, either. Historically and culturally, the gun has been perceived as a “male only” object. And frankly, in many respects, a male-only totem. How many young boys with even a hint of machismo about them would want a first-time hunting rifle or shotgun with a “women’s stock” for Christmas? On the other hand, many slender women have grown accustomed to buying practical jeans in “boys’ sizes,” and more women have purchased sneakers or boots in “youth sizes,” too.

It’s a marketing thing.
If we can just set that part of it aside, the main point we take from it is: “youth stocks” fit smaller-statured people, among whom are a lot of women. Therefore, youth stocks are extremely useful for adapting shotguns and rifles to female shooters. 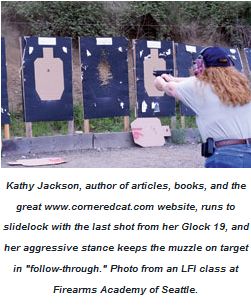 Massad F. Ayoob is an internationally known firearms and self-defense instructor.
Massad Ayoob has authored several books and more than 1,000 articles on firearms, combat techniques, self-defense, and legal issues, and has served in an editorial capacity for Guns Magazine, American Handgunner, Gun Week, and Combat Handguns.
Massad Ayoob was former Vice Chairman of the Forensic Evidence Committee of the National Association of Criminal Defense Lawyers (NACDL), and is believed to be the only non-attorney ever to hold this position.