We heart acclaimed author Brad Thor. And now he's written a thriller just for the girls.

We here at Girl’s Guide are kinda sorta freaking out about the newest book written by one of our all time faves, the “master of the thriller”, Mr. Brad Thor. The book is called The Athena Project and we are currently knee deep in it (it was released 11/23). How intensely, page-turningly addictive is this book? Well, let’s put it this way- the other girls had Twilight. We have The Athena Project.

Check out a review below.

Brad Thor’s new thriller, The Athena Project, may at first glance seem so far-fetched — the U.S. government is training a cadre of smokin’ hot, kick-ass female Delta Force ops; yeah, right — that you might be tempted to dismiss it as just another Hollywood fantasy. Not only would you be way wrong, you’d also be missing out on one of the year’s great action-adventures.

The plot of the novel (don’t worry, I won’t give anything away) involves a Delta team of four hot chicks, an Italian terrorist financier, long-lost Nazi technology and even a cameo appearance by Thor’s regular hero, Scot Harvath, who’s the lucky guy who supervises the Fox Force Four in the field.  But there’s a lot more than simple plot going on in Brad’s work, as well as in the work of all the best thriller writers, and that’s what I want to talk about.

While it’s true that every story begins with the writer asking himself the question, “What if…?” in the thriller business there’s an added component, which is the factual basis for asking the question in the first place. That is, whether it’s Brad Thor, Vince Flynn, Tom Clancy or the other terrific writers currently working the field, the story is generally firmly grounded in actual fact: some of this stuff you can’t make up, because it already exists.

Let me give you an example. The Athena Project opens with a reference to the DARPA program — the Defense Advanced Research Projects Agency, otherwise known as the toy department.  Ian Fleming’s fictional “Q” — you remember him, the slightly nutty guy played in the movies by Desmond Llewelyn and John Cleese — has nothing on DARPA, which is tasked with coming up with weapons of the future. Now you may think that a semi-obscure outfit that combines the military and the private sector, that is constantly rotating personnel to keep it fresh and imaginative, and which combines hard-headed science with imaginative science fiction is strictly the stuff of fiction. On the contrary, DARPA exists and does it exactly what Thor says it does.

Ditto the existence of the female Delta ops.

Lethal hotties have been a staple of Hollywood imagination for a while now — Angelina Jolie and Charlie’s Angels, take a bow! — and while it still taxes credulity that some of the cinematic lethal weapons could in fact take down a highly trained male opponent, Thor does not give us invulnerable Amazons who cannot bleed. His women can talk men, fashion and shoes with Carrie Bradshaw and the rest of the Sex and the City gals, and put tight shot groups through the bad guys, but they’re not Superwomen. Things go wrong, ops go tits-up, as it were, and (naturally) they’re being used as pawns in a much larger game — and we all know what happens to pawns.

Along the way, there’s plenty of action, some romance, some choice conspiracy theory involving the Denver Airport, and even a tinge of real horror as the enormity of what the Nazi scientists were up to becomes clear. The Athena team was first introduced in Thor’s novel, Foreign Influence, and it’s great to see the babes — Alex, Julie, Gretchen and Megan — get their own book,  the first of what ought to be many more.

Because what Thor and his colleagues in the thriller-writing business (I count myself privileged to be among them) do is more than simply provide escapism or mere entertainment. Long ago, I found that I could tell the truth about contemporary life more effectively through “fiction” than non-fiction by grounding my work as realistically as possible and then sneaking in all sorts of interesting tidbits about what is really going on.  Call it “faction.”

And this is precisely what Thor does, not only in his latest book, but throughout his work — his novels are meticulously researched, carefully plotted and fired at the reader with Delta force. As with the work of his semi-fictional special ops, there’s no wasted motion in a Brad Thor novel, just a cool, commanding professionalism that delivers in the end what was promised at the beginning, in spades.

Trust me, you’ll never look at a hot blonde with a sniper rifle quite the same way again.

And a little video of the author discussing the project: 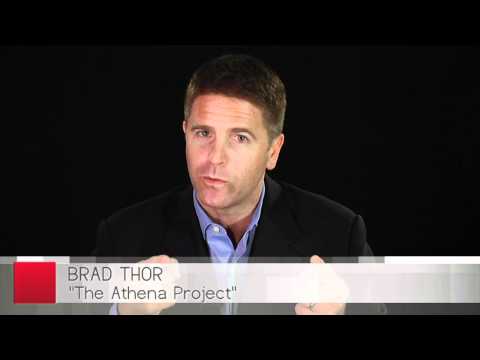